This cartoon sums up the disastrous outcome of the General Election 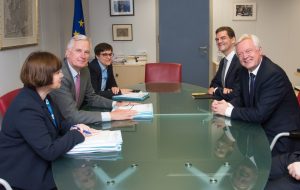 One way to avoid the looming catastrophe of Brexit would be for the 27 EU Member States simply and unilaterally to extend the negotiating period from two years to five – without waiting for a request to do so from the British government. They could use the argument that two years was simply too short for such a complex negotiation. I think at the same time they should refuse any transition period.

The British government would not like this proposal and could of course still insist on leaving after two years. But, since the present negotiations are leading to a cliff edge and to Britain simply crashing out of the EU, it seems highly unlikely that there would be a majority in Parliament to exit after two years when five years was on offer and available.

Anything could then happen in the following three years. In, very likely, a deep recession, Britain might come to its senses again. And a new government could well be in power.

My argument is set out in more detail in my recently published article in Dantemag which can be found here.

This is my first blog post for a year and a half. Then, early in 2016, the risk of environmental destruction certainly appeared as the greatest problem facing humankind. Internationally this was publicly acknowledged by the adoption  on 12 December 2015 of the Paris Agreement by 195 negotiating parties.

Some of course perceived this problem as intrinsically linked to social injustice across the world and to rising inequality in income, but especially in wealth. Certainly this was the argument of Pope Francis in his highly influential 2015 Encyclical, Laudato Si.

Looking back this now seems like a high water mark, at least for the time being.  Since then the tide of interest in the environment, at least in the media and public discourse has receded. Nevertheless, a great deal of practical activity and investment has been maintained, particularly in renewable energy, the costs of which continue to fall. Whether all this will be sufficient is more doubtful.

Then came the Brexit referendum and the election of Donald Trump as President of the United States. Both clearly reflected something deeper happening in these countries – ordinary people taking an opportunity to kick out blindly at the ruling political class and the neo-liberal economic policies that have been pursued there for the last two or three decades. These policies have allowed the rich to grow richer and left  stranded the poorer members of society, whether they are in work or not.

So the political ground is shifting, not just in these countries but in the wider world as well. And the attention of the media, (and indeed my own attention), has become very focussed on these events. These are not problems for humanity on the same scale as that of the destruction of our environment. But they may represent the beginning of a change in political discourse and social values across the wider world – as the tip of an iceberg in effect. Social divisions and the intolerance of others seem to be increasing. And many feel freerer to voice their long-held intolerance which only serves to exacerbate the vicious circle.

In an article in the Guardian newspaper on 1 August 2017 concerning proposals for a Holocaust memorial in London, Sir Peter Bazalgatte (chair of the Holocaust Memorial Foundation) was reported as saying that the memorial would “underline what happens when society breaks down, when law, order, decency and tolerance, and empathy disappear. This is what happened in 1930s Germany, and it has lessons today, lessons about tolerance, lessons about race hatred, lessons for all of us”.

More bluntly Joan Salter, 77, who was separated from her Polish-Jewish family during the war, said: “[It is] comforting to assume that civilisation is a one-way street, when in fact experience teaches us that it is but a thin veneer, very easily torn away. Germany yesterday could so easily become Britain tomorrow. In recent times, we have seen the splintering of social cohesion, the growing willingness to express extreme views, the ability of some to act out their intolerance with violent acts, the lack of respect for those of different cultures. We live in dangerous times.”

It may well happen that the Constitution and institutions of the US prove to be sufficiently robust that Trump’s presidency will be seen as a passing blip in the history of that country – so long as he does not engage in nuclear war in the meantime. And, although the final outcome of Brexit may be the wilful impoverishment of a country whose people cannot yet accept that Britain is no longer immensely powerful and influential on the world stage, this would still not be an event of world importance. Yet the undercurrents driving these events along may well be of great importance and worth trying to understand.